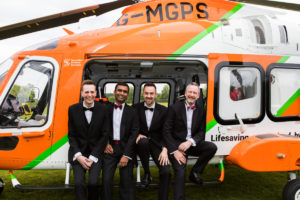 Business leaders from the region and beyond, members of the peerage, MPs from both sides of the House and friends of the hospital were just some of the many figures who turned out in support of the of the L&D at a special 80th birthday gala dinner held at The Conservatory at the Luton Hoo Walled Garden on Saturday 18 May.

The event was held in aid of the hospital charity’s Helipad Appeal which aims to raise the final £1.5m needed to secure the project to install a 24/7 emergency helipad within the hospital complex.

The helipad will dramatically enhance the level of care which the hospital, already a standard-setter in emergency care, can offer stroke and cardiac patients and trauma victims. It will also make the L&D the only hospital in the whole of the UK to have a level 3 neonatal unit directly connected to a 24/7 emergency helipad. The new helipad will be the first to directly serve Herts, Beds and Bucks.

The evening included a scheduled fly in and lift by the brand new Magpas Air Ambulance during its first week of operational service. This aircraft, which will be one of those using the new helipad has state of the art software enabling it to fly further, at a faster speed and will enable the Magpas enhanced medical team to reach an even greater number of patients in the region. 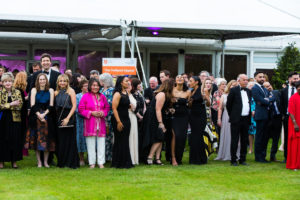 The evening was generously supported by multiple local sponsors including Bidwells, The Conservatory at the Luton Hoo Walled Garden, Petal and Bee and TAG Artistic Group. Highlights of the auction included Four Tickets to the Ashes, signed Luton Town FC memorabilia and training packages, and a VIP Woburn Safari Park Experience.

In addition to a welcoming speech from host Edward Phillips, whose great-great-grandmother, Lady Ludlow, was, 80 years ago, the principal benefactor of the original hospital, the guests also heard from A&E Consultant David Kirby about the ability of a helipad to ensure better outcomes in critical aspects of emergency work i.e. stroke, cardiac, major injury and violent crime.

Edward Phillips, Chairman of the Helipad Appeal and Saturday’s host, said: “We could not have been more delighted with how the evening went. More than £90,000 was raised for the appeal – a fantastic amount. The level of support for this project from all the communities in Luton and the surrounding area has been truly humbling.

He continued: “That said, our work is not yet done. Our aim is to raise the whole of the final amount needed for the helipad during 2019. We have made significant progress towards this total, but there is still a short way to go. The next few months present an opportunity for businesses and individuals in Herts, Beds and Bucks, who have not yet got involved, to get behind a local project which is guaranteed to save local lives.

“For every £1 raised a fantastic 96p goes direct to the cause. Every penny makes a difference.”

L&D Chairman Simon Linnett, added: “The L&D has an enviable reputation as the most accessible hospital in an emergency. This is because the whole hospital contributes to that effort and the support for this project reflects the gratitude of the whole community.’ 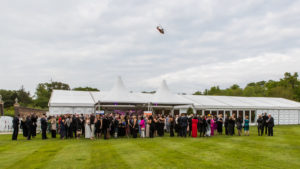 Waving farewell to the MAGPAS aircraft as it circles and departs for base.

Preparing to Land, which is the Fund’s flagship campaign for the 80th birthday year, aims to raise the final £1.5m needed to secure the project for an on-site helipad. A remarkable £4m has already been pledged towards the cause.

At present, there is no helipad at the hospital itself – Air Ambulances must land on a local school playing field and transfer patients the final distance by road, significantly eating into that crucial ‘Golden Hour’ after an incident. If it is deemed too risky to undertake the final road transfer, casualties can potentially be transferred to emergency helipads in London, Cambridge or Northamptonshire. The closest of these is over 25 miles away.

The new helipad will significantly enhance the standard of care already offered by the hospital, including:

Donors can help the cause by contacting fundraising@ldh.nhs.uk. Direct donations can be made via Just Giving (www.justgiving.com/fundraising/ldhhelipad).