Thanks to the extraordinary generosity of local traders, suppliers and volunteers, the Luton and Dunstable University Hospital’s (L&D) NICU Big Build is now complete and will open its doors in the second week of October.

Launched in February, the NICU Big Build project sent out an appeal to local tradespeople to help renovate a three bedroom house to provide accommodation for parents whose babies are being cared for on our Neonatal Intensive Care Unit (NICU).

Located opposite the L&D, the property has been completely refurbished over the last six months, with local traders carrying out £90,000 worth of work for free. Major donations have included a new roof, a complete set of new windows, a conservatory, bathroom/wet room and a fitted kitchen. The house now boasts five bedrooms, a kitchen, wet room/bathroom and a small garden space which will be available for those parents with babies on the unit who live far away from the hospital.  It means the Trust now has two properties available for use by NICU families.

A barbecue was held in August to say thank you to everyone who had been involved in the project, followed by an official opening on Wednesday 25 September, attended by the High Sherriff of Bedfordshire, Meryl Dolling, The Deputy Lord Lieutenant, Vinod Taylor, the Mayor of Luton Cllr Tahir Malik and the Town Mayor of Houghton Regis Cllr Martin Kennedy. 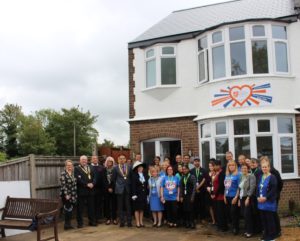 Sarah Amexheta, Head of the hospital Charity, said: “It was a privilege to open the doors for staff and local dignitaries to see.  The accommodation has been a real triumph of community support, resulting in more than 80 local traders coming forward to support the project with trade skills, materials and time for free. We are really proud to have a level three neonatal unit and the accommodation will benefit many families each year. The accommodation is offered for parents to stay in free of charge, and we are lucky to get support from the Steel Trust, our Light up a Life fundraiser, and local fundraising efforts to support the on-going costs. ” 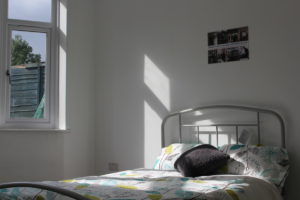 Zahida Bansal’s daughter Hana was born at just under 25 weeks and spent two months in NICU. She said: “Because we live further away, the fact that I was able to stay in the parents’ accommodation made a world of difference. If the accommodation hadn’t been available it would have been so much more stressful because when we needed to be by Hana’s side quickly. It really is a fantastic facility.”

Liam Greer’s daughter was transferred to NICU from another hospital in the early hours of a Saturday morning. He said: “I slept on the waiting room sofa that morning. Later on that evening, they offered me a room in the bungalow. I cannot explain the difference it has made to me during my daughter’s recovery. To not have to travel and know you’re only round the corner helps massively. I cannot thank the L&D Hospital enough for accommodating me. It has definitely made this whole experience easier for me when I am going through a tough time. Thank you L&D Hospital NICU.”

“When I was offered the bungalow to stay in it was a big relief and meant  I was only moments away from seeing my boys.” said Jim Abrehart. “As a lot of parents are in the same situation as my wife and I, it gave us a sense of security and comfort that I was able to come see my kids whenever I wanted.” 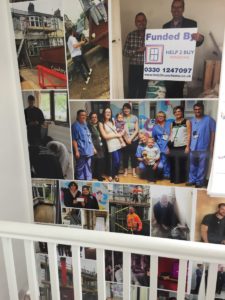 He continued, “There is everything you need in the bungalow and it is comfortable. For parents all you want is to be there for your kids and you don’t want to leave their side. Staying on the hospital site is a big thing and is comforting knowing you are not far away. Since I’ve been at Luton and Dunstable Hospital, all staff nurses, midwives and doctors have been fantastic and are very informative and helpful. I don’t feel like we need to ask any questions as they have told me everything and it’s very reassuring. I live in Essex and the fact I don’t need to travel is a fantastic and means I can be here 24/7.”

The building renovation project was managed by local builder Rob Burton from R Burtons and Sons, whose own children spent time on NICU.

They include Ben Robinson from B-A-R Electrical and Mechanical Services who provided electrical and lighting services. He said: “It’s been a pleasure to give my time to this worthy cause and it’s been a totally different experience working with a team of volunteer tradesmen  – imagine 10 new starters in a team of 11! It’s great to see so many people willing to give their time for free.”

Barrie Gardiner volunteered to assemble the flat pack furniture. He said: “I chose to volunteer my time towards this fantastic project, not because we are a NICU family but because we as a family have had to use the facilities of the hospital rather a lot this past year. My Grandson has been ill and I have had major surgery to remove bowel cancer. When I first heard about this project I saw a way I could give something back to the hospital which was something I had been wondering how to do. It has been a privilege to be involved.”