Music therapy for our premature babies

It was World Prematurity Day on Tuesday 17 November and an opportunity to share some of the exciting developments that have been going on in Neonatal Care at Bedfordshire Hospitals NHS Foundation Trust.

One of these is music therapy which is now being used to enhance care for premature babies on the Neonatal Unit at Luton and Dunstable University Hospital (L&D).

Launched in the summer with the introduction of 11 pods and speakers onto the Neonatal Intensive Care Unit (NICU) the project has proved so successful that funding for a further 24 sets has recently been obtained so that it can be rolled out to all babies on the unit over the next few months.

The music therapy is delivered by IPod which plays tailor made music for premature babies, via a Bluetooth speaker which is placed inside the baby’s incubator or cot.

Six of the pods and speakers were funded by Luton Council’s ‘Talking Takes Off’ initiative, which is aimed at improving speech and communication in children and special care. The Hospital Charity provided the remainder of the funding.

Neonatologist Lisa Selkirk led the project. She said, “We are extremely grateful to Luton Council, and to the hospital Charitable Fund, for allowing us to introduce music therapy to our unit. It is a great way of enhancing care for our babies, by reducing their stress and helping them to sleep, all of which helps in their development.”

The therapy has been very well received by parents on the unit. Baby Rayan was on the unit recently and his mother, Zoheen Hussain, said: “I am very thankful and appreciate the baby music. Rayan really enjoys listening and it keeps him very calm.” 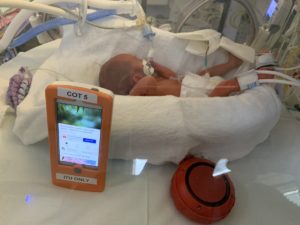 Pictured is one week old Mally, born at 26 weeks, in the Neonatal Unit at Luton & Dunstable University Hospital, listening to specially composed music via a bluetooth speaker placed in his incubator.