Mandy is a hero

Many congratulations to Mandy Bates, Housekeeper in A&E, who has been nominated for a national Unsung Hero award in the Estates & Ancillary category.

Mandy was nominated for her “exceptional work ethic every single day. Despite the demands of a busy ED no task is ever too much for her, she always has time for everyone… her outstanding achievement was to turn a disorganised growing department into an organised tidy workplace… She always finds time to listen to colleagues and shows empathy to patients even when she is really busy. The whole department feels incredibly lucky to have Mandy working alongside them. She is a true angel.” 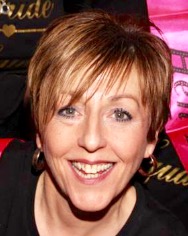 Housekeeper Mandy Bates, who has been shortlisted for an Unsung Hero Award

Mandy, who lives in Flitwick and has been working with the A&E team for eight years, said, “I was so overwhelmed when I was told about being shortlisted for an Unsung Hero Award that I cried. I have never been nominated for anything in my life before, and I certainly don’t see myself as a hero, so I was absolutely gobsmacked.”

She continued: “I love working with the staff in A&E, they are such a great bunch of people for whom I have all the admiration in the world – in my view they are the unsung heroes, not me. This means such a lot to me – to be recognised and appreciated in this way.”

Mandy was nominated by colleague Vikki Gibbon who said: “Everyone in ED is thrilled by this nomination, which is so truly deserved. A win would be the icing on the cake!”

The Unsung Hero Awards are the only national awards for non-medical NHS staff and volunteers, and are an annual event.

Mandy and 19 friends and colleagues will be attending the Awards Ceremony in Manchester on 28 February, and we will all be keeping our fingers crossed for her.

Mandy said, “It’s not important if I win the award or not, being nominated is enough – it means the world to me.”