The Luton and Dunstable Hospital Charitable Fund has launched its Bake Off to Take Off initiative in aid of the hospital’s Helipad Appeal. A special downloadable cake-sale pack has been created – providing everything a foodie fundraiser could need to host a Bake Off to Take Off.

The ‘Bake Off to Take Off’ pack – the idea for which was inspired by the hospital celebrating its 80th birthday in this year – includes posters, invitations, a bunting template, and a selection favourite baking recipes chosen by some of the hospital’s teams.

The initiative was officially launched on 5th July 2019 alongside the NHS Big Tea (www.nhsbigtea.co.uk), which was held to raise money for NHS charities across the UK on the date of the organisation’s 71st birthday. 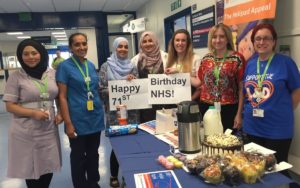 Sarah Amexheta, Head of Charity, said: ‘2019 is a milestone year for the L&D, and Preparing to Land is the charity’s flagship appeal for the 80th birthday celebrations. Among multiple other fundraising ideas, cake sales seemed like a natural fit, and the NHS Big Tea a natural launch date.

“We have had a lot of fun with bake-offs between hospital staff in the past, but thought it was about time to stop eating all the cake ourselves and start spreading the love! Hopefully the pack will provide inspiration enough for events large and small. We look forward to seeing the results.”

The Helipad Appeal aims to generate £1.5m, the final sum required to secure the project to build a helipad within the hospital complex. With no helipad currently at the hospital itself, Air Ambulances land on a local school playing field and transfer patients the final distance by road, significantly eating into the 60 critical minutes after an incident. If it is deemed too risky to undertake the final road transfer, casualties can potentially be transferred to the nearest emergency helipads, in Northamptonshire, Cambridge or London. The closest of these is over 25 miles away.

The majority of the helipad funding – over £4m – is already in place. It is hoped that the helipad will be operational by 2021.

You can also help the cause via Just Giving