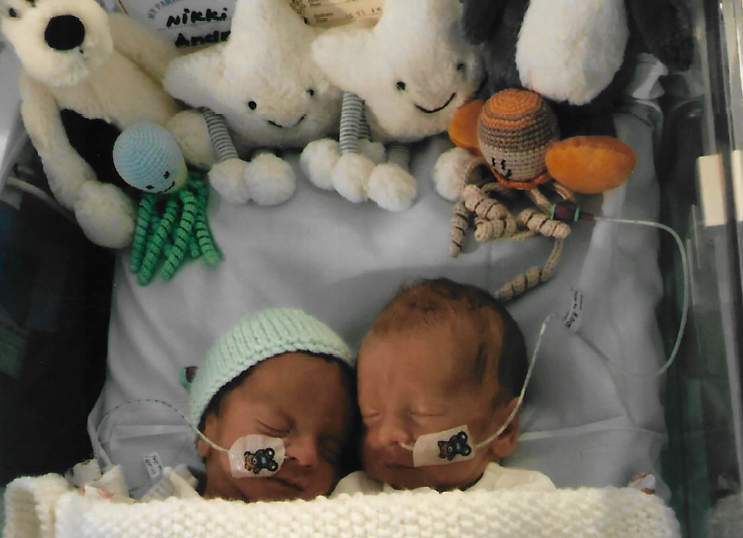 The 17th November, is World Prematurity Day. This day has passed me and probably most people by since 2011 when it was decided this should be a notable day in the calendar worldwide. I had never heard of it and never needed to be aware. Until 6th September 2018.

Nobody ever expects to have a premature baby, and nobody can ever prepare you for the journey you will go on when you do. You spend every day during the entire pregnancy, hoping and praying everything will go as it should and for my previous two pregnancies it did… and I only wish I had appreciated it more. Although we were constantly aware that many risks were always underlying with a twin pregnancy, there are risks to every pregnancy and whilst with twins this is heightened, it was going well.

So the moment my waters broke on 6th September, at 30 weeks was unexpected and terrifying.

Cutting a long story short, the decision to deliver the babies by a category 1 section was made due to Walter’s heart rate being 68 beats per minute, which had dropped even lower by the time he was born. The doctors worked quickly and less than ten minutes after they discovered Walter’s low heart rate, both babies had been born.  They were stabilised and rushed to the NICU.  Both boys were placed in incubators and on CPAP machines in intensive care, treated for sepsis and on fluids. They were tiny but stable.

We were able to see the boys briefly that afternoon but it’s pretty blurry following the general anaesthetic. The following day I visited the NICU for the first time properly and coherently. This is where my experience of prematurity really began. 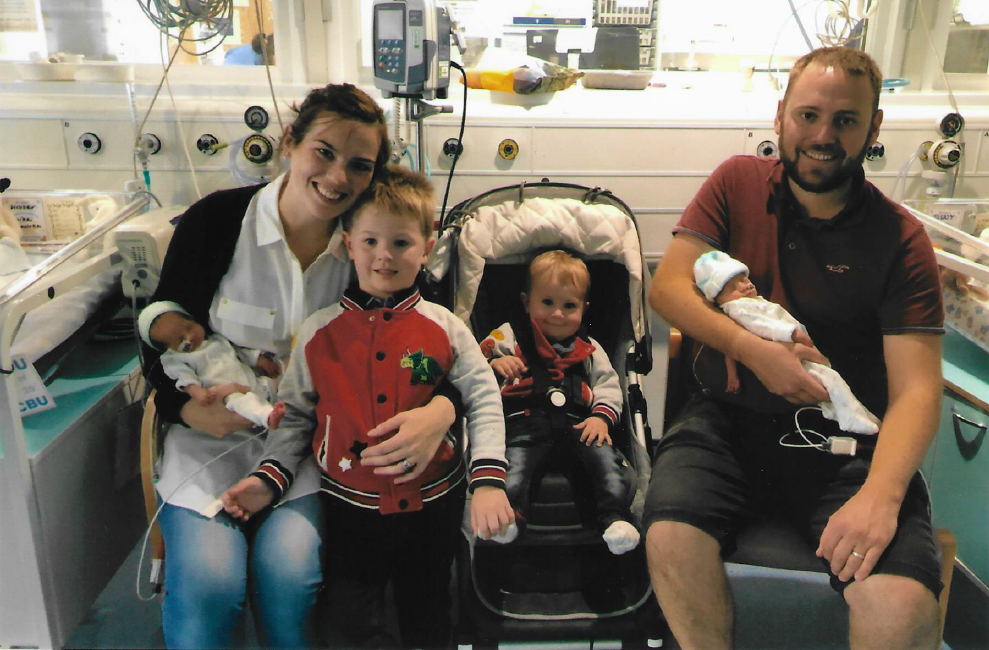 Entering the NICU for the first time was like being in a parallel universe. We were initially met by hand washing stations and strict instructions on how to do this, which is completely necessary but incredibly frustrating when all you want to do is catch a first glimpse of your tiny little humans. Turning the corner to then enter the NICU itself is terrifying. Nothing can ever, ever prepare you for that first moment you walk in and the sight that greets you. We were instantly transported into a world of beeps, tubes, incubators, lights, alarms, wires and terrified parents. Even now watching videos back and hearing the beeps and noises makes my stomach flip and my heart skip a beat. Our babies looked like tiny little fragile dolls in huge fish tanks that were far too big for them. They had wires, monitors, tubes, IV’s and breathing equipment all working to keep them alive and to help them develop and grow, we watched them being fed a mere 1ml of milk and it was all so surreal. But amongst all these machines and incubators, working quietly and always keeping a watchful eye on us and our babies, were the nurses.

These are the people that trained so hard to look after others, that get paid so little but yet they are literally saving tiny little lives every day. Every single nurse we met was in charge of, and cared for more than just our babies, but at the same time, they always made it seem like all they were there to do was care for only our babies. Every day we got a comprehensive report when we entered the unit on how each of our boys was doing and why they were doing certain things. The nurses were calm, friendly, happy to answer questions no matter how stupid and continuously working to care for our boys. These amazing people see the very happiest of times and help you to celebrate each little milestone; when the babies do well, when they start feeding, when they come off machines and when they are finally able to go home.  They also see the very saddest of times and they continue to show up and carry on. They care for such vulnerable little warriors who came to be in this world far earlier than they were supposed to, and they run themselves ragged, tirelessly doing this.

At 30 weeks gestation, we quite quickly found ourselves counting our lucky stars we had gotten as far along in the pregnancy as we did as some babies were impossibly tiny and far more vulnerable than ours, but everyone is in a similar boat. Everyone has their most precious possession/s depending on someone else other than you. Everyone has been through the fear of being told their baby is premature and all the risk factors that go with this. Everyone has been told about all the tests these tiny, helpless little bodies must go through in the coming weeks, months and years and the uncertainty of what the future will hold and how they will develop. But more upsetting, is that everyone has come to realise that at the most vulnerable time in their lives, your babies actually don’t need you, as much as you need them. Although nurses and doctors encourage skin to skin and parental involvement, quite simply, their needs are met by the nurses and they don’t need you as much as you want them to, which is truly heart-breaking in those first days and weeks.

As a parent of two boys already, we felt pretty confident caring for babies. That all changed the second the babies were premature and in the NICU.  When we walked through those doors, all of a sudden we had to ask to touch or hold them and we were unable to even change a nappy. We couldn’t be autonomous, not initially, and we began to doubt and question every parenting skill we had within us. However, the nurses were there for us too.

They taught us how to change nappies by putting our hands through the windows of an incubator like we were diffusing a bomb, whilst at the same time negotiating around wires and tubes. We learned how to swab their mouths and wipe their bottoms with sterile water and even how to touch and hold their far too thin and sensitive skin and limbs to reassure and comfort them. We learnt to watch the monitors to help us understand if our babies were calm and happy or agitated and distressed. We were learning how to parent again, in a different way, from scratch. The nurses coached us the whole way. The nurses in the whole NICU unit aren’t just nurses. They are also teachers.

When the boys made good progress and moved ‘down’ to high dependency and eventually special care, it became less daunting. We became more confident and there were gradually fewer wires, less medical intervention and it was more about ‘growing’ and we were finally able to change nappies and hold them without getting tangled in too many wires or having to ask for help. We had our first time cuddling both boys at the same time in the special care unit, a dream that took far longer than we ever thought to be a reality. We learnt how to tube feed the boys independently and then we were able to teach the boys how to bottle feed. To see the progress from those tiny vulnerable little babies wired up to everything possible on day 1, to bottle feeding and not needing any intervention, and finally being able share a cot together in special care was phenomenal.

We were lucky our NICU journey was fairly short. Inside NICU it feels like you are in a bubble, time just flies by and you are oblivious to the outside world.

Leaving my children has never been a strong point of mine but being forced to leave these tiny little babies in the care of very lovely, competent doctors and nurses, but also complete strangers, was torture. The boys were little fighters and the nurses allowing us to be so involved and to effectively take over their daily care when they were out of incubators and in the special care unit allowed us to show we could keep them safe and well at home.

I wouldn’t wish what we went through on anyone, hands down it was the worst and hardest time of our lives, but in a way, I feel privileged to have experienced it. I was able to watch the development of our babies on the outside, something most parents thankfully don’t get to see.  Watching their eyebrows and eyelashes grow from nowhere, watching them grow up from vulnerable, pink, wrinkly little dolls with paper thin skin into healthy looking babies. We were able to spend the weeks sitting and giving them undivided attention during the day for 10 hours and when they have older siblings this is something that would not have happened had we been home straight away, instantly we would have been pulled 4 ways and they would have had to ‘fit in’ as they very quickly did when we went home. To meet and learn so much from the doctors, nurses and hospital staff was also a privilege, to see all the hard work and dedication they show every moment of every day, all whilst being genuinely lovely and supportive to parents from all walks of life, and who have different levels of experience.

The support we have received since being allowed home was second to none and everyone welcomes us to appointments like old friends!  We have had amazing input from Sam who came to our home to check on us in the weeks after the twins were discharged, Mandy and Anne when we had to visit the unit for weigh ins and eye checks, Rachel for Physiotherapy, Caroline for dietician advice, Dr Kapadia for regular check ups and monitoring and Dr Schleinitz for development assessments.  We could not be more thankful for all these people who have been an important part of our journey! 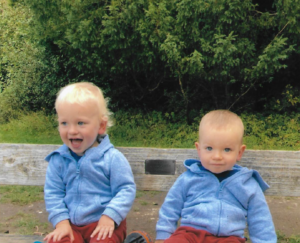 Now, at a little over two years old, Teddy and Walter are worlds apart from their rocky start in life.  Teddy has tight blond crazy curly hair and is solid as a rock and Walter is like a cheeky little elf, still tiny but very mighty!

We have ensured that over the past two years, we haven’t had unrealistic expectations for their development, we didn’t know timescales of when certain things would happen, we just encouraged the boys and gave (and continue to give) them opportunities to help them develop and we celebrate each milestone for them when it does! The boys have made fantastic progress and they have also developed their own totally different, but equally cheeky personalities!  They adore (and are adored by) their big brothers and they keep us on our toes every day. We are so proud of them.

Experiencing prematurity is hard.  It is life changing and an experience I will never forget. I will always look back on the memories of our time on the unit with a strange sort of sadness, an element of fondness and every single one will always be treasured.

We will forever be grateful to everyone in the whole unit for saving our boys and holding us up in the process and World Prematurity Day will now and forever mean something very special to us.